A Brief Tour of Tours

First day of class, which involved no class at all. Instead, a brief oral exam (“It is said that to learn a new language is to learn a new culture. Do you agree?” I did not.), juice and cookies, then an introductory lecture and presentation of the various optional excursions.

Then a walking tour of the city: 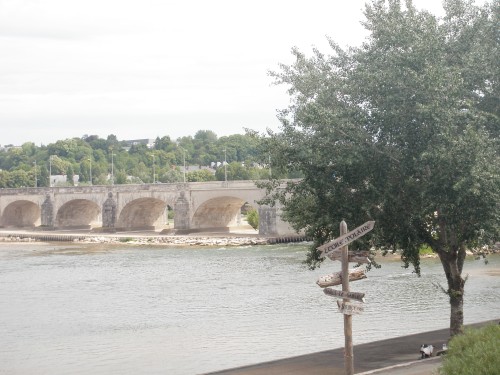 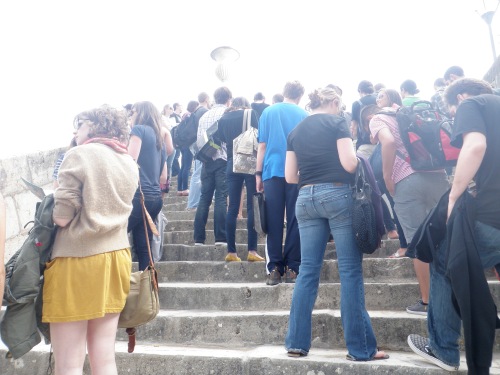 And then lunch, with new friends and everything! (I thought I’d be tout suel here, like I was most of the time in Oviedo, but it looks like there will be socializing).

Then we walked around, buying things and speaking in broken french entre nous (I’m not the only dork!).

rose-colored light and a sense of calm

A first walk by myself in Tours.

Good thing I’ve learned from my past mistakes.

Arrived, having slept maaaybe two hours on a freezing plane. Recognized some students from my same program, but we soon went our own separate ways. Caught a train into Paris, then Metro line 5 to Gianny’s house (a friend of a friend–thanks, Jane!) in the Marais, right near Bastille.

Met Gianny (an American living in Paris, completely fluent, fairly outrageous and totally accomodating), Susan (from Toronto, in Paris for a study-abroad) and Amandine (an Australian who’s been in Paris for a month, but leaves today for the south of France, then on to Scottland, etc. Living the dream). Drank earl grey with soymilk and ate a croissant, courtesy of Amandine. Introductions all around, small talk, mini French lessons and listening to music while getting ready. Then we’re off! 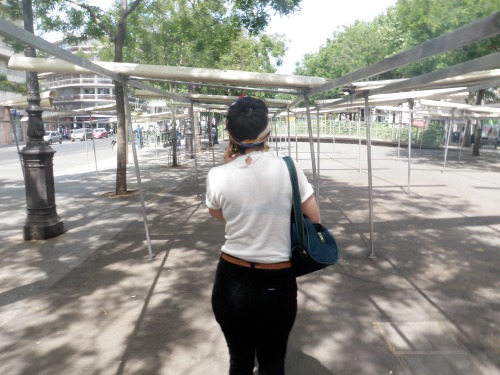 …to a free champagne tasting. Lots of little glasses of crisp, bubbly champagne and new people to meet (from Paris, Australia, Iceland, China, and England). Lots of chat (some in French, some in English). Number and emails and full names exchanged (for FaceBook, of course). 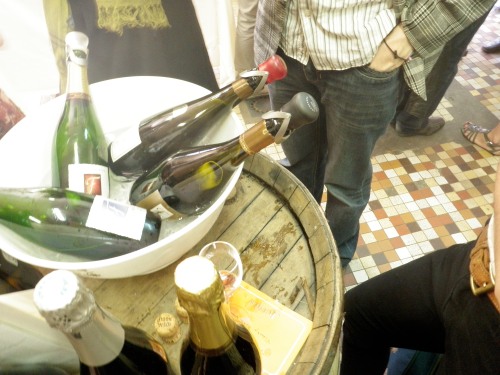 Then Amandine and I split off to check out Les Portes Ouvertes in Belleville, a sort of gallery stroll that allows the public to go into artists’ studios, squats (a free, artistic comune/studio), galleries and homes to see what they do, meet them, talk.

Susan joins us for all this, along with her classmate Ronny (a New Yorker with no accent) and a Japanese girl named Yumiko that Amandine had met the night before (a calligraphy teacher who speaks little English and less French).

Then we head on to a café on a quiet street corner to see a live modern dance performance–one woman dressed in gossamer rags, rolling around on the cobblestones, climbing cars as they try to pass by and alternately baffling/interesting the public. Ronny and Yumiko leave, but we are soon joined by Tony (a photographer from Brittany who’s 6 or so years in Paris) and Amajda (an au pair from Italy). Conversation about famous films and traveling, jumping around from French to English to Spanish and back.

(I began to literally fall asleep in my chair at this point, and the café’s espresso machine was broken, but I was determined to beat jet-lag by NOT NAPPING. So I took a short walk around by myself and rallied). 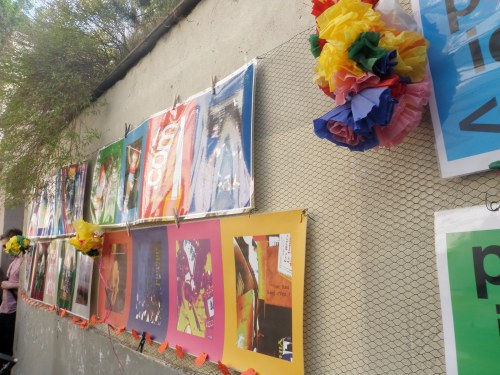 Then more art, Amajda gets sucked into conversation with an Italian sculptor, and Susan goes home to work on an art project with a discarded door she’d found. (It’s after 9:00 at this point) So Amandine, Tony and I head off to a French-African restaurant that had caught her eye the other day, but we stumbled upon live blues music and so instead bought 3€ sandwiches from a Thai place down the street. We ate, drank red wine in plastic cups, and enjoyed the music.

Later, we were joined by one of the organizers of Portes Ouvertes (French), and his assistant (American, and quite brash), as well as two of the artists–a Frenchman who’s lived in New York for over a decade now and a French woman who told us about hitch-hiking from France to India TWICE when she was younger (in the 70’s). Apparently you can make it in two weeks, but she took longer–a month or so–stopping in Pakistan, Iran, etc. 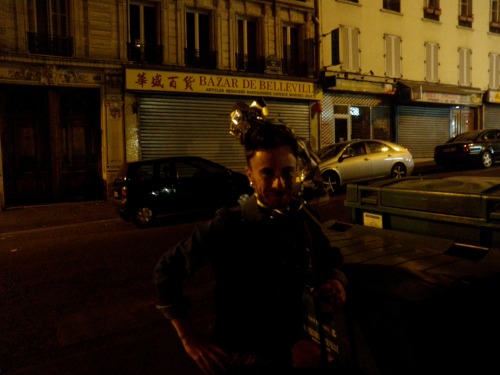 Then it was midnight, and we were tipsy, so we caught the metro home, pausing to kiss goodbye to Tony. Amandine and I had the place to ourselves after Gianny decided to take a one-night, spur-of-the-moment road trip to Normandy to celebrate with friends.

Woke up, more Earl Grey, packing, bird baths, goodbye to Amandine, into the metro, then boarded a train to Tours. Where I am right now, sitting on a patio outside my room.

Inner Workings, On A Plane

A loss of interest in food and eating has arisen in me again. It all seems like so much effort. This is just over the past few days, but already I can tell it’s going to stick.

I wonder if anyone out there has ever kept a diary/journal without once hoping that it would be published, if only posthumously. I know it’s not the ONLY reason I keep one–it is helpful, or at least interesting, to look back over what I’ve written (educational)–but of course I also think that my words are fit for print. That my inner workings are universally fascinating. Or should be.

I need to write more. Haven’t written in [my journal] in any REAL sense for almost two months, and it was a month before that.

That’s okay, though. I’ve been absorbing myself in books, soaking up pages and pages of other people’s lives, and just waiting. And I’m okay with that, suddenly okay with LOTS of things. Like not packing a favorite cardigan for a month in France (or any pads), not writing in my journal very often, not having finished “setting up” my apartment. It’s all okay. I do what I can.

And a new love, for myself, that crept in so slowly–first leniency, then acceptance, and now something tending towards nurturing (if you can believe it!). Kevin would be so proud. I know I am.

FIRST: Woke up early with a volatile stomach (too much going-away-party-ing) and drove to Moms’ to give Mom the car back/drive her to work. Ate Cliff bars and MiniWheats with Rosie, while talking Disney movies and inventing “pattern names” (hers: Lavender Fuchsia Lavender Fuchsia, mine: Red Rose Red Rose). Gossiped with Mom in the car while she put on make-up. Back home by 7:15 and back into bed with Kevin, warm and safe.

THEN: Slept an hour before up-and-atem (for reals this time), 15 minutes to get ready and then ride my bike to catch the bus. Today it was an older, skinny man, a middle-aged, big-bellied man and a polite dowdy woman talking about their experiences “in the service,” dealing with PTSD and how it will always be a part of them. (The other day it was a tattooed hispanic man in his forties and a young skinhead exchanging prison stories. I love this bus route).

NOW: Baby’s sleeping, and I am reading my at-work, non-fiction read (The Checklist Manifesto by Atul Gawande–liked by Malcolm Gladwell and in that same vein), sipping soy cocoa and munching buttered toast.

I swear this is the first time we’ve had a (plastic!) handle of vodka at the dinner table. Next to the four-year-old. We should do it more often, though.

Oh, and it just happened to be the first time Brother Bear’s new girlfriend ate dinner with us. Welcome to the family. 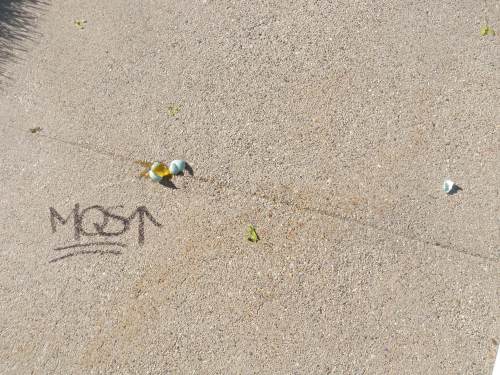 Would any of you fellow bloggers out there (Nicole? Cody?) be interested in writing a guest post to my blog? Not sure how much time/wifi I’ll have available while I’m in France, and I would LOVE a collaboration. Think on it. 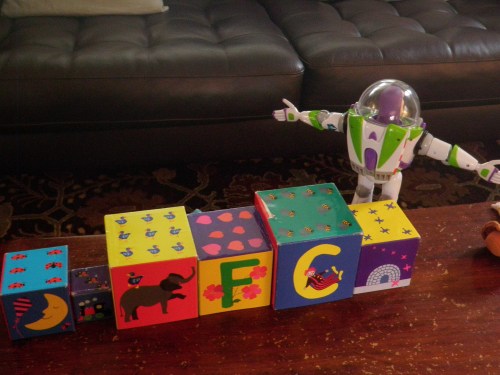 Figured out how to post from Not-My-Own-Computer. Drinking coffee (though I ought not…), getting excited for France, not even minding the rain so much. Making new friends lately, and life is not bad. Life is life.

dreams about having to play my jury again (in front of a panel of strangers, and being late, and not having enough rosin)

dreams in French where I can understand everything but can only speak in short, halting sentences

dreams about missing my flight, being late to the airport, not being able to find everything I need to pack, etc.

and then waking in the early morning with fears, anxieties, worries, thinking about love and life and if it’s okay to feel the way I feel and what are we going to do about this whole, messed-up situation