A Tale of Two Cousins*

One of the biggest bummers about growing up, for me, is that it becomes increasingly difficult to make new friends. This is a perennial theme. I miss the instant, easy friendships from grade school–nervously meeting somebody new, chatting happily, discovering that you have tons in common (you both have Lisa Frank journals, for example, or maybe you both have major crushes on Jonathan Taylor Thomas). Then the next thing you know, you’re having sleepovers, sharing your deepest, darkest secrets, and jumping on the trampoline in her backyard. You know, friendship stuff.

I’m not saying that sort of friendship chemistry is impossible in adult life, just rare. Extremely rare. The last time it happened for me was with Mel, freshman year of college, and that was largely due to the fact that we lived in the same room, practically.

Until…until my uncle got re-married, and I got a new cousin, Misty. And we both lived in Europe. And we both had BA’s in English. We had both gone back to school for a second degree, and we had both played the violin at one time or another, and we had similar worldviews. And similarly complicated family arrangements.

So just like that–click!–instant friends. New cousins. And on this recent trip to Florence (to visit her), we really did just seem to understand each other, to be able to relate well and compare our similar experiences.

But not as amazing as how much stuff I crammed into that tiny little Longchamp for a 3-day weekend in Italy. 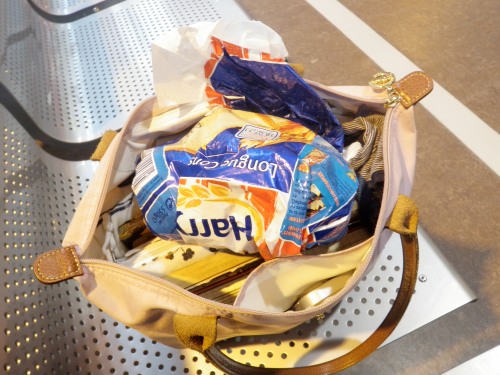 So just keep all this in mind while you’re looking at my vacation pictures, okay?

*I do not want this post to in any way diminish my already cousin, Emily, and the awesome connection that we have, and our years as pen-pals, secret spies, whisky drinkers, and koala lovers. So now I have two awesome cousins, both of whom speak Italian. Guess I’d better get on that.