As promised, and without further ado…a blog from Korea! ABOUT Korea! Written by my oldest friend, Ms. Whitney. Enjoy!

Hello and thank you for welcoming me as a trans-pacific writer for Ms. Sarah’s big world blog.  My name is Whitney and I am pleased to share stories of my first travels to the Asian continent.  It has become increasingly evident that this 5-week trip will bring me insights on two cultures; while I am here to travel new places and see new things, my visit is entirely inspired by Tim Wilde, the love of my life, and an officer in the US Air Force.  His being stationed at Osan Air Base affords me the occasion to make (what I feel are) interesting observations on Korean culture as well as that of American airmen.  Being a foreigner to both, allow me to share some of what I’ve seen during my first few days.

My non-stop flight from San Francisco to Incheon International Airport left on Thursday, July 28th, at 11am and deposited me in Seoul on Friday, July 29th, at 3pm.  There is a 16-hour time difference between my usual location and Tim’s, and though the flight was 12 hours, I “lost a day” upon crossing the International Date Line.  My return flight across the Pacific (which, according to those I know who’ve experienced it, has caused worse jet-lag than any other flight they’ve flown) will leave Seoul at 5pm on a Sunday, and I will arrive in San Francisco at 4pm on that same Sunday.  Trippy right?  In any case, I feel a little disoriented at this point, but am able to sleep through the night, so let’s consider that a WIN.

One thing that struck me while on my 12-hour flight was my American need for personal space.  After living in Paris for a year, being crammed into a metro between the backs, bellies and armpits of half a dozen other people, I got used to sacrificing personal space so that as many people could fit into a car as possible.  In the US, I commonly see that we are reluctant to allow others to encroach upon that 18-24 inches of requisite buffer while on the bus, subway or while being herded like cattle out of ridiculously crowded concert venues.   This need for space also shows itself when on airplanes.  I find myself commonly hoping, after taking my window seat on the plane, that one of the two remaining seats in my row will remain empty so that I don’t have to sit elbow-to-elbow with someone else.  If the middle-seat person arrives and the aisle-seat person never shows, middle-seat person scoots over to the more desirable seat, giving us both a little more room.  On my flight, however, a Korean woman sat in the middle seat next to me, and when the aisle seat remained empty, she was content to stay in her assigned seat.  This blew my mind.  It seemed to suit her, however, and she was unperturbed when I basically had to lay my head in her lap to fish for something in my backpack on the floor.  As Sarah would say, “different strokes for different folks”… is it tasteless of me to twist that rhyme into “different needs for different breeds”?

In any case, the flight was harmless and I managed to watch 4 full-length movies and a Simpsons episode back-to-back, something I’ve never endeavored to do in my life.  I arrived at the airport and Tim met me there, despite historic heavy rains the previous day (some parts of Seoul were receiving 2 inches per HOUR when I left the US and streets were flooding and mud was sliding…), so we got on a bus and came to Osan Air Base (not in the city of Osan, I’ve learned, but in Songtan).  And so comes my first introduction to overseas Air Force culture.

I regret not having taken many pictures to share: an amateur move in the world of blogging, I suppose.  Despair not (I tell myself), many will come.  I wasn’t allowed to bring my camera to some activities anyway, as military intelligence has restrictions on where such devices are allowed to be.  Squadron bonding events (called “roll calls”), when held in “the vault” (secure military intelligence room with no windows), do not welcome cameras, mp3 players, cell phones etc.  I was surprised that I was allowed in to the roll call, as this sort of tradition (adopted from fighter pilots and adapted to intel gents) can be pretty exclusive.  Introductions, consumption of goods (read: alcohol and bacon-jalapeno popcorn), war story rituals and naming ceremonies were among the main activities, and the roll call concluded with the passing of the mayoral gavel from one “patch” (boss) to the next.  These men and women, being trained in the ways of the US government presentational system, were prompted throughout the evening with, you guessed it, a powerpoint slideshow.

After the roll call, we piled into half a dozen cabs and left base for the pedestrian streets outside of the main gate.  We popped into a couple of favorite bars, one of which served a mixture of soju (rice vodka, essentially) and Sprite, along with something that made it glow green, from tea kettles.  I suppressed my worries about what cancer-causing elements may be in a drink that makes things glow green and downed shots along with the rest of the gang. 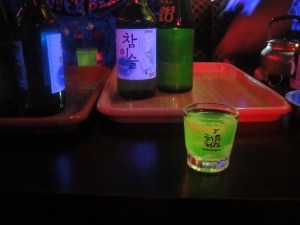 I hope to elaborate on more drinking gimmicks in a future post.  This one, I realize, has become somewhat lengthy and I thank and applaud you for continuing to the bottom of it (especially if you’re one of Sarah’s readers and don’t actually know me).  The rest of my first week here has consisted of a series of goodbye dinners and drinks for the resident patch (again, boss) who is outta here and heading to Italy.  My next adventures will be with Tim’s brothers, Andrew and Daniel, who are arriving for a week-long visit this afternoon.  The three Wilde Boys and I are heading to the demilitarized zone which separates North and South Korea on Saturday.  Check in again for commentary and photos from that field trip!