Now I Know Why I’ve Never Been to Sundance

I’ve been busy, Friends, trading in my traditional 3-day weekend of baking, reading, running and writing for a new adventure: Sundance. The Sundance Film Festival in Park City, UT, to be specific.

I should clarify, though: no, I am not seeing movies, and celebrity gawking has been minimal (though I did see three different members of Modern Family, separately! That was cool). What I am doing is busking, Friends. I am making money and having my photo taken about a bajillion times per hour. So are my friends:

They even got inteviewed! Check it out here. I didn’t get interviewed, though. At least not in any way that’s shown up on the internet, as far as I can tell. What I did was play viola in the freezing cold, fingers numb, with my friend Eric and Corbin, in shifts. When Eric and I weren’t playing his compositions or Bach or “Mad World,” our friend Corbin was laying down a mean Rachmaninoff. Like this:

The thing is, even though I’ve lived in Utah my whole life, I’ve never been to Sundance. I’ve only seen one Sundance movie AT the festival itself, and that was at the Tower Theater on 9th and 9th. Not Park City. I’ve never experienced the celebrities-meet-quaint-mountain-town madness, and I’ve always wanted to, to be a part of it all. This was one reason for coming home from Spain–to be able to play with Eric at Sundance and claim my fifteen minutes of fame. Haven’t you wondered what that would be like, Friends?

Well, wonder no more–it’s not that great. Park City is not even close to the quaint mountain mining town it once was and currently pretends to be. It is a land where the women wear fur boots and vests with black leggings, and the men wear tech gear, and all the locals are trying to see and be seen by celebrities, thinking they have some special insider status, and all the celebrities are trying to see and be seen by other celebrities and could give a shit about the locals. Also there are a lot of restaurants and art galleries and Sundance volunteers running around in puffy orange vests.

And then there’s us–a scraggly bunch of kids from “The big city” (Salt Lake, Friends), just trying to stay warm and make a few bucks. At the end of longer songs I can’t feel if my fingers are touching the strings or not. To stay warm we walk around, pop into galleries to “admire the art” (read: “sample the free punch and snacks”), and watch greatest hits of the 2002 Winter Olympics on a cow couch (a cowch) at Java Cow, where I ate a Rico burrito that somebody left on the table, having only taken one bite. It was delicious. 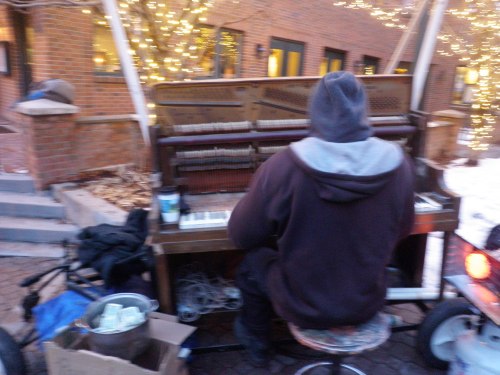 Sundance…not so much. Definitely not worth giving up a happy life in Madrid. Ah, well…this is how we learn.

Cross that off my to-do list, and on to the next adventure!