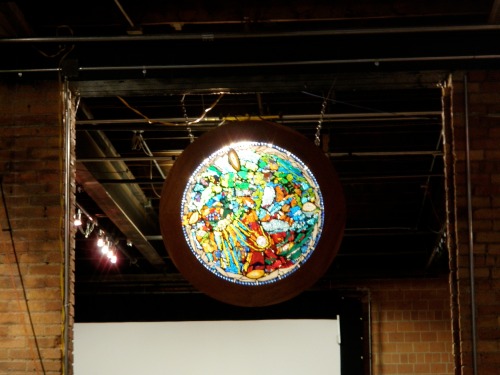 Last Friday Eric and I played a benefit. For…I’m still not sure. There was so much gong on–us, and a small jazz group, and some sort of Latin salsa-esque group. All in different corners of the same big warehouse. There was no start or end time for us playing. We just started when we arrived and played until a big band started, right in the middle of our song.

Then we got food, listened for a bit. Lindsey Friend was my date, adapting to my busy night so that we could have time to walk and talk. I ran into an old friend. It was uncomfortable. Later, I ran into an old band-mate–the first time that’s happened since I quit. Strange, strange Salt Lake City.

The best part was these little girls who stole a little dummy/doll from an old fortune tell machine, and dramatically rushed to throw it away in the trash can where people’s paper plates and food scraps were piling up.

I wanted so, so badly to go up to one of them and whisper “I know what you did, and you will pay for this.” But I decided, as a fervent ghost fearer, that would be a karmically irresponsible thing to do.

Seriously, though, it was a weird night.