This one was by far my favorite, which is why I reproduced it verbatim in the zine. But I’m also still going to post it here, just because. So far you’ve only missed: 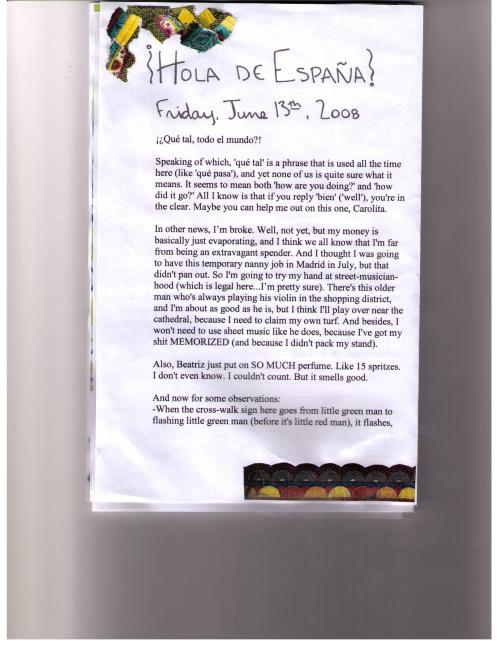 ¡¿Que tal, todo el mundo?! Speaking of which, ‘que tal’ is a phrase that is used all the time here (like ‘que pasa’), and yet none of us is quite sure what it means. It seems to mean both ‘how are you doing?’ and ‘how did it go?’ All I know is that if you reply ‘bien’ (‘well’), you’re in the clear. Maybe you can help me out on this one, Carolita.

In other news, Im broke. Well, not yet, but my money is basically just evaporating, and I think we all know that I’m far from being an extravagant spender. And I thought I was going to have this temporary nanny job in Madrid in July, but that didn’t pan out. So I’m going to try my hand at street-musician-hood (which is legal here…I´m pretty sure). There’s this older man who’s always playing his violin in the shopping district, and I’m about as good as he is, but I think I’ll play over near the cathedral, because I need to claim my own turf. And besides, I won’t need to use sheet music like he does, because I’ve got my shit MEMORIZED (and because I didn’t pack my stand).

Also, Beatriz just put on SO MUCH perfume. Like 15 spritzes. I don’t even know. I couldn’t count. But it smells good.

And now for some observations:

-When the cross-walk sign here goes from little green man to flashing little green man (before it’s little red man), it flashes, like, TWO TIMES. So there is no time to fool around and you have to run. However, the time between when the light turns red for the cars to stop and when the little green man appears for the ‘peatones’ (pedestrians) to go is FOREVER. It’s so long. And some people jaywalk while others don’t. I do if I’m in a hurry.

-The dogs here are full of personality. They’re all over the city and off the leash, just walking down the street with their owners like ‘Oh, hey, what´s up? Yeah, me? I´m just goin’ for a walk with my human pal, no biggie.’ It’s awesome. I want to steal one.

-All of the children here are immaculately dressed. They’ve all got cardigans and knee-high socks and leather shoes and it looks like from the forties but it’s now and I want to steal one of these, too. Dashiel says I should pick a young one so it won’t have memories of its parents.

-All of the grandmas in this city have their grandkids in the afternoon, out and about. All of them. Or so it seems.

-and this one’s an anecdote: My mom here has this spray that she does in the kitchen after her boyfriend smokes a cigarette, or really just whenever she feels like it, and anything that isn’t on lockdown (i.e. in the refrigerator or sealed by me and not her) gets the spray in it and then it tastes and smells like chemicals for ever after. Like this turrón candy that she keeps pushing on me. Or the sandwich bread. The other night she made me a ham and cheese sandwich and it tasted like poison, so I was trying to eat as little as possible while still being polite, and then she offered to toast it, which either evaporated the chemically-ness or just singed it deeper into the food, but either way I ate it and I’m too wussy to be like ‘Listen, Beatriz, it’s about the slow poisoning that you’re accidentally imposing on us…’

And now it’s midnight and I need to go to bed because I have to get up at 6ish to catch a bus to Bilbao. Woo! This is our free weekend, and I’m going to Bilbao and then to San Sebastian with the twins and a quiet boy named Kevin. We did fake interviews in pairs today in conversation class (in Spanish), and we all had to draw a famous person’s name out of a hat for who the interviewee would be. I was the interviewer in my pair and Katrina was Madonna. We won. She just kept saying ‘Madonna IS Kabalah, she IS yoga’ and I guess I did a good job of being the caring/concerned host (‘¿Cómo estás, Madonna? ¿Cómo. Es. TÁS?’). Kevin was Cookie Monster, and he played it totally straight, like ‘Well, I usually just hang around Sesame Street with my friends, Elmo and Oscar–he lives in the trash–and we count to ten, or we talk about different letters, like M, or maybe S.’ I thought I was going to pee my pants.

And that´s all for now! Oh, there’s so much more to write about! Later, though, later. I love you all! ¡Hasta luego!

p.s. Those of you who are receiving this for the first time: Yeah, that’s because I decided you should recieve this now. 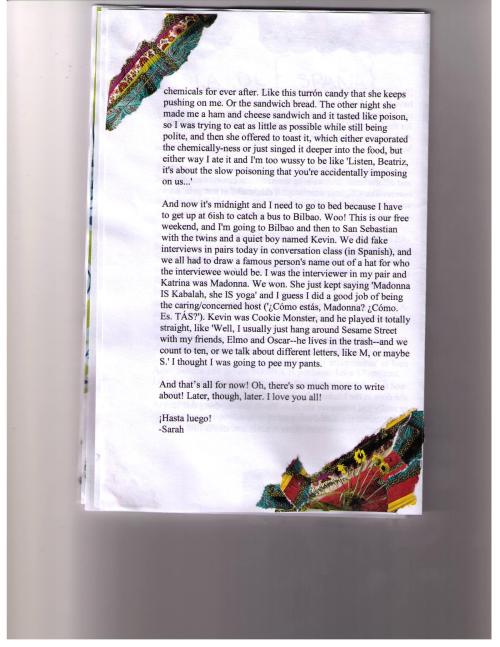 Need to catch up? So far you’ve only missed:

¡Hola, Todo el Mundo! So, tomorrow I will have been here for a week, and that´s interesting and strange for me to think about. I oscillate back and forth between feeling like ‘I have plenty of time and so much has happened already and it´s only been a week and I still have four more weeks here to do so many other things and I´m going to learn so much!’ and like ‘A week has already passed and there´s still so much to do and I´m running out of time and I´m not going to be able to do everything that I want and I´m not learning nearly enough and I´m not going to learn hardly anything!’ You know, but that´s just me, and Beatriz assures me that I´m already speaking so much better, and I know that I´m comprehending a ton more.

But I should point out that both Beatriz and my professor thank it´s funny that, as well as we speak (in level four), none of us knows basic vocab, like for the names of different articles of clothing, or the names of animals. I don´t know, I´ve just never learned that stuff and never really needed to know it before. So I´m gaining lots of vocab.

We all sort of feel like kids again though. I´ll tell you how my days go, and then you´ll see. I wake up and get ready and Beatriz is already up and has layed out breakfast like in those cereal commercials where they´re like ‘part of a complete breakfast,’ and you´re like ‘I thought cereal WAS a complete breakfast…’ Then she gives me a snack to take to school, and then I walk to school with this girl named Jeanine and then I have school from 9:30 to 2, and in school we learn the names of animals and how to descibe people´s faces and we play games. Then after school everyone goes home to eat lunch with their families and I eat with Beatriz and we watch the news and chat about the world and our days (I guess that part is a bit more adult). Then I take a nap, and then I practice violin, and then I hang out with my friends until dinner (at 10). Then I come home, eat dinner and chat with Beatriz and Eusebio (her novio). And then I do my homework and go to bed. I feel about twelve.

The exception is last night, though, when we drank beer. The majoritiy of the students in my program want to party, and a lot of the dudes are on a perpetual quest for weed, and I keep having to explain that ‘I´m a prude and I may have a beer but I´m not going to get drunk.’ Last night we wound up at a bar with all of the other students (something we´ve been trying to avoid), and they were WASTED and LOUD, and it sucked. There´s about 4 others who (like the twins and I) don´t want to party, but even that turns me off, because I know I won´t make any Spanish friends in such a large group, and that´s what I really want. Sometimes I even feel stifled with just me and the twins. So I´m going to start taking afternoon walks by myself to try and meet some Spanish kids (if it ever stops RAINING!).

Okay, really long e-mail, so I guess this is enough for now. ¡Hasta Luego!

p.s. Mom, can you forward this to Steve. I lost his e-mail address already. Also, can you send whatever Netflix just came for me back? I put my account on hold, but that doesn´t go into effect until they get that back. Thank you!

p.p.s Spanish speakers: today we went on an excursion, and I was like ‘Man, I want to hacer me some senderismo’ Thought that was funny.

Stay tuned for more blasts from the past!

Eight hours on bus, after I had double-checked that it would only be 5 1/2, and Brett was still miraculously waiting for me at the station. I’ve never been so happy to see anyone in all my life. He waited for 2 1/2 hours. Big, big hugs and bigger smiles.

We made it to Giuseppe (our host)’s house, dropped my stuff, went out for a walk. I finally bought two of the four things I wished I’d packed–a cardigan and a scarf. (The other two would be my pocket alarm and my camera battery charger. Ah, well). Then we ate dinner, plus a bottle of wine, at an Italian place. So far, Chile is cheaper than Argentina, and I’m okay with that.

I was feeling pretty groggy after the wine and wanted to just stay home and turn in early, but Giuseppe Sr. made me a pisco sour (the national drink, more or less), and I rallied by (inexpertly) taking pulls off of  Brett’s cigarette. Then we went with Giuseppe to a planning party/drinking fest at his friend’s house with a bunch of members of Rotaract (like JV Rotary Club).

We drank piscola (the JV national drink, and much better than Spain’s calimocho), danced, talked, and played drinking games until the host’s mom came home and bade us goodbye. Then it was: giggling on a public bus, late night french fries, and a good, long sleep in a bed while Brett snored.

It’s good to be with friends in a welcoming country.