Death and the Short Story

Recently I saw 127 Hours, and it was amazing. It was one of the most exciting, interesting, inspiring, original movies I’ve seen in a long time. And I told people this. And they were unimpressed. Unmoved. Completely unmotivated to see the movie.

So, now that I’ve read this book–Sum: Forty Tales from the Afterlives by David Eagleman–that was a fascinating, intelligent, creative, and telling exploration of humankind in life, as well as death, I just feel like I’m not going to be able to convince a single soul to read it. I just really don’t think so.

Anyways, selling points: I only knew to even look for this book because it was mentioned in a New York Times Magazine article. That’s a trusted source, right? (Plus props to me for “doing my homework” and following up on a thing). Also: short stories! So it makes for a good bus/subway/lunch-for-one read. Here’s a tasty preview: 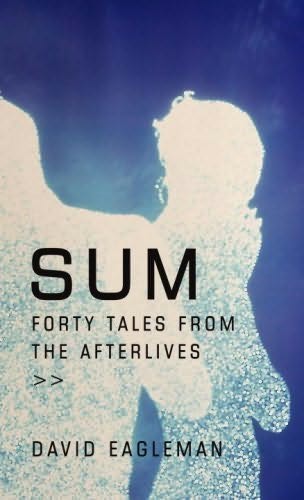 “In this part of the afterlife, you imagine something analogous to your Earthly life, and the thought is blissful: a life where episodes are split into tiny swallowable pieces, where moments do not endure, where one experiences the joy of jumping from one event to the next like a child hopping from spot to spot on the burning sand.” (from Sum)

“The Collectors construct lives of parametric experiments: men and women who adhere well but are shot past one another too briefly–brushing by in a library, passing on the step of a city bus, wondering just for a moment.” (from Adhesion)

“When we’re in a human body, we don’t care about universal collapse–instead, we care only about a meeting of the eyes, a glimpse of bare flesh, the caressing tones of a loved voice, joy, love, light, the orientation of a house plant, the shade of a paint stroke, the arrangement of hair.” (from Angst)

“They watch how each human driver aims for his own private piece of the city, isolated from neighbors by layers of glass and steel. Some of the humans reach out to make cell phone contact with a single friend out of the innumerable hordes. And gazing out over the steering wheel, each human feels the intensities of joy and grief as though his were the only real examples in the world.” (from Pantheon)

“In the afterlife, in the warm company of His accidental subjects, God now settles in comfortably, like a grandfather who looks down the long holiday table at his progeny, feeling proud, somehow responsible, and a little surprised.” (from Seed) 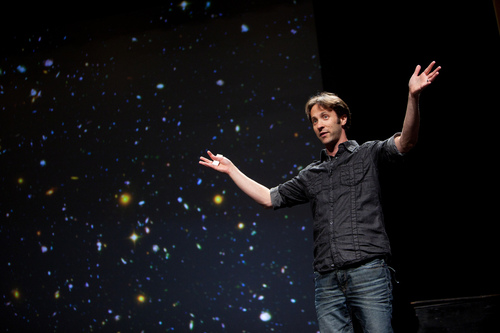 “We are the moment of least facility for the atoms. And in this form, they find themselves longing to ascend mountains, wander the seas, and conquer the air, seeking to recapture the limitlessness they once knew.” (from Search)